A Day In The Life: General Choas

So I was talking with the groomers the other day about what a challenge it is to get Chaz to eat his food. 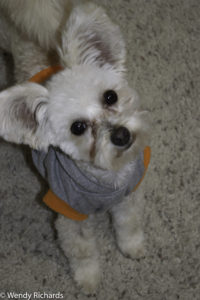 Picture an adorable two year old, batting their baby blues at you as they shake their head ‘no’ at the food put before them. You know they need to eat, and yet you just can’t make them do it.

Now add into that picture a dog who refuses to eat to the point that it makes him sick. I’m not one for feeding my dog human food so something had to be done. That has been my life with Chaz since the detergent incident of 2016.

Back story: After a long field and track trip, we got home and our pet sitter  dropped the dog off. Hubby started on laundry while I sat on the couch with my feet elevated trying to relax a bit when I heard hubby say, “Chaz just licked up some detergent” but it didn’t register just how bad of a situation it was.

Come 3am and the realization of the situation hit, the disgusting smelly reality, hit.

A vet visit, and 10 days of enticing a dog at high risk of ulcers to take his meds and eat, and our lives have never been the same.

The here and now: Chaz is on a low fat GI diet (known as a prescription diet), something easy for him to digest. He refused to eat the generic vet brand so I sprung for the good, Royal Canine, stuff.

And still he wasn’t eating even half of his daily caloric quota. I was at a loss. Bribing won’t work, tuna only works sometimes, even coconut oil (his favorite at tooth brushing time) wasn’t enticing him enough to get the food down his throat.

So when the groomer suggested cottage cheese, my jaw hit the floor. I don’t eat a lot of dairy because of my anaphylaxis, it just exasperates an all ready intense reaction, so I never even considered dairy as a viable option.

She said that she had a boarder who wouldn’t eat if the parent was gone, just wouldn’t do it. So a vet she works closely with suggested a dollop of cottage cheese on the food. It helps calm the digestive tract down so the food is more palatable.

I went out and bought a small thing of low fat cottage cheese as soon as I got the dog home. And do you know what? It worked! While his evening feedings can still be a bit testy, his morning meals go much smoother. At least I know he is getting some nourishment every day. It’s no longer a hit or miss situation.

The one downside is that his breed is known to be hyper. And while I thought he was hyper when he was barely eating… He is definitely more hyper now that he’s eating more regularly. There is an up side to everything right?

A Day In The Life, Slider