A European Dining Experience in Colorado 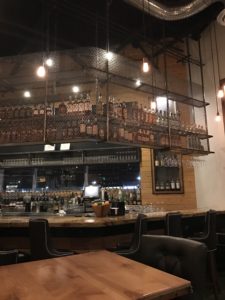 In my never-ending quest to find restaurants who understand my food allergies and take them seriously, I stumbled across this gem. My Husband’s favorite story to tell of his time in Europe is how laid back the dining experience is. No hovering, no rush, and no hurry to turn over a table. “When you walk-in they expect that you are going to be there for the rest of the night.” I finally understand what he means.

Due to my food allergies I always call ahead to ensure I can eat at a new restaurant, and Chef Ben took my call seriously and made the time to answer my questions. When hubby and I arrived I was cautiously optimistic, and in return was blown away.

Chef Ben was experimenting with some new recipes for rolls (they are attempting to make all of their offerings in house including the bread), the rolls are amazing and I really hope those make it to an every day offering. It is a rare thing for me to be able to eat the rolls offered; that alone would ensure I come back again and again.

I was hoping to be able to have their Caesar salad, but thankfully they were on their toes because I couldn’t have it nor could I have their port  dressing (because of my food allergies), which was offered on their wedge salad…however, Chef Ben was also working on a new vinaigrette. I put my taste buds at the mercy of Chef Ben and ordered the Local Organic Green salad with the Blood Orange Candied Shallot vinaigrette! Oh! My taste buds were so happy! It was worth the risk. 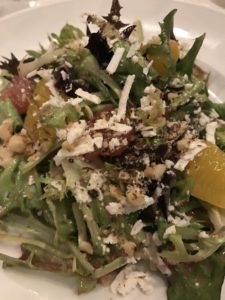 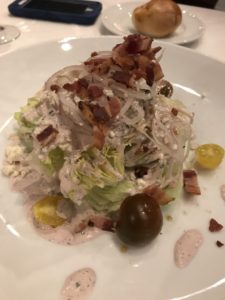 There are a few things on their menu subject to change. Their Peacemakers Punch is just such an item, it is different not only every night but also each batch. You are literally at the mercy of your bartender, so ask what’s in it if you are trying to avoid certain ingredients. On this night I was in luck as there was no pineapple in the punch, no indeed, I had a delightful concoction that I can only describe as lavender lemonade. And it was heavenly. 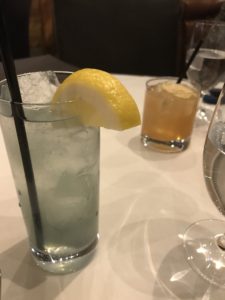 peace makers punch in the tall glass and their version of a mule.

Hubby got their Hogan’s mule; it was a bit tart for his taste but the apple garnish made the drink absolutely delightful.

When I said the experience was completely European, I wasn’t exaggerating. We were seated, and served water; with an explanation that dinner was made from scratch and only once we ordered it. Thus it takes a little more time than we might be accustomed to.   Then my husband got up to go to the bathroom and whole process stopped till he returned. We had questions about the drinks menu so we got that settled and only then were we brought the dinner menu.

As is my process I did have the waiter check on the two entrees I had chosen for me to eat so I could then choose which one I wanted. Thankfully I could have both of them so I just had to make up my mind. This process took time, as it should, however, Sean and Chef Ben made sure I knew that they were taking my food allergy seriously. 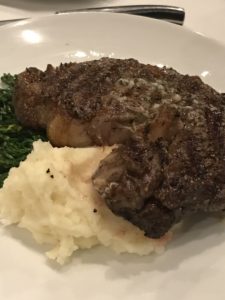 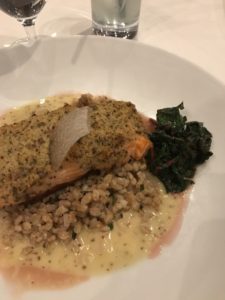 Once dinner was done, we were brought the dessert menu and at that point my night took a decided turn for the better. I could have dessert, and not just the Crème Brule; I could have all but one of their offerings plus or minus an ingredient or two. I got their chocolate stout bread, with passion fruit sorbet the perfect complement to the sweat and dense cake. Hubby had their bread pudding, claiming it was the best bread pudding he had ever had, and that is saying something as it is his favorite dessert and has had it in every location he has ever traveled to and with his military career that is an extensive list of bread pudding locations. 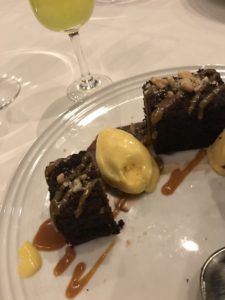 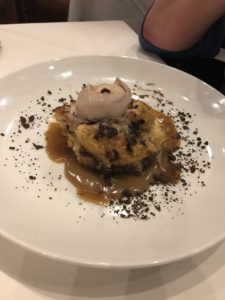 We have a new location for special nights out. Since you pay for quality you can expect a hefty check at the end of the night. However, you can also expect to not mind one bit, because you know you ate a quality meal made from quality ingredients.   Be sure to check them out when you are in the area.

Checkout my reviews on Yelp and TripAdvisor!

5 Things I Do Before Trying A New Restaurant

When you have food allergies, no matter how severe, there is one thing that strikes fear in your heart like none other…eating at a new restaurant.

Here are a few steps I take before trying a new restaurant.  They aren’t fool proof, and it doesn’t mean that you will be able to eat anything you want on the menu, but they should save you a few uncomfortable evenings after diner.

1. Look them up on line especially pay attention to their menu. If they have instructions at the bottom…* eating undercooked…yada, yada, and it also says to “alert your server if you have food allergies”… then in my experience you should be in luck.

2. Call them, but not at a peak time.  If you google the restaurant during their peak times should be listed.  When you call them ask, specifically, to speak to a chef or the kitchen manager. Do not just talk to whomever answers the phone, if they aren’t aware of food allergy severity or if they aren’t a part of the ordering process they will not be able to thoroughly answer your questions.

3. Get a name for when you go into the restaurant. This way you can give your server the name of who you need to talk to concerning your allergy.  I always call, then double check when I get there.  You can never be too careful.

4.  Get a card listing your allergies, your allerigst should be able to help here. If not there are companies who will make them for you.  This makes it easier for your server. They can take the card back to the kitchen so the chef can come out and quickly lay out your options.

I’ve been asked several times if I had a card, which I don’t because of the nature of my allergies, it’s hard to list out what I’m allergic to.  Often people assume that since I’m allergic to soy, so long as there is not soy sauce I should be fine.  But that isn’t the case. I have make sure there’s no mayo, or that the restaurant only uses real butter as opposed to a margarin butter blend. And the list goes on and on.  Never be afraid to repeat yourself.

5.  Keep your expectations in check. I can’t tell you how many times I’ve gone to a new restaurant and had one of two things happen.

I either found I could only have one thing on the menu, or that the chef would have to make something not on the menu for me. Which I have to tell you isn’t such a bad thing.

I can have anything on the menu, that isn’t asian inspired, and I’m so overwhelmed I can’t decide.

While I’ve come to appreciate the chef who is willing to go off book, I typically get food that is so good I’m willing to eat the same thing every night for a week.  It’s not always that easy.

Once when on a trip we went to a seafood restaurant in Las Vegas.  I had called a head and talked to the chef, so they were prepping an area in which to make my food and we had settled on what would be made for me.

We were on a field and track trip so there was a rather large group of us going.  When we got there, I spoke with the chef again confirming that I could eat what was being offered.  While I was doing this the server came and took everyone else’s order.

Once my order was confirmed: pan fried trout (a personal favorite), steamed asparagus, potatoes and brussel sprouts, and an olive tapenade.  I sat back and enjoyed the conversations going on around me.  As everyone’s orders began coming out, seafood platters, crab cakes, a bunch of deep fried goodness I sat there calmly waiting for my food.

The chef brought it out himself.  After confirming everything looked ok, the chef returned to the kitchen and I looked up to many pairs of eyes staring at my plate.  One of my friends raised his hand, while looking at my plate and proclaimed, “I think I have food allergies”.  HA!

I must admit it was one of the best meals I had had up until that point in my food allergy journey.

On the opposite side of the coin, we recently had a new restaurant open here and I made the mistake of calling during their opening night.  I checked for peak times and none were listed, I quickly realized why none were listed.  Anyway,  I talked to someone in the kitchen who was very frazzled, and she asked that I email, but also said that she would get some answers and call me back.

I emailed them asking about their menu, and never heard a thing back.  It’s rather disheartening, but I will not eat there. Hubby has asked a couple of times about it, but since I do not have answers I will not be eating there.  It’s that simple.

What are some steps you take to ensure you don’t take a hit when eating out?